For today's card, I used a Grumpie from the Lil Love Grumpies digi set to send a Get Well greeting to a grumpie from the Lil Grumpies Occasions set. The front panel was printed wallet size on gray cardstock, colored with colored pencils, cut and mounted to fluorescent yellow cardstock, torn to deckle edge and mounted on black cardstock.
The middle panel was stamped on yellow, blue, and orange cardstock with Palette Hybrid ink in noir black. The blue was cut out and mounted, then the orange fish was cut out and mounted on that. Highlights were added with colored pencil and the base was torn to a deckle edge, then mounted on the black cardstock. The black cardstock is 5" by 11" and folded trifold. The third panel has a yellow block and says "Get Well Soon". Enjoy!
Posted by P. (Mountain Mama) at 8:55 AM 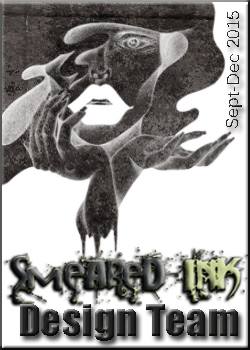 Click above to add your project to our current challenge.

*Every month a new Anything Goes challenge will be posted.

*To participate, you must make a NEW project that features at least 1 STAMPED or DIGI IMAGE... FROM SMEARED INK ,add it to the post using the Inlinkz linky. Any other supplies and images may be used. Your link MUST take us directly to your project on a PUBLICLY ACCESSIBLE blog or website, or it will be disqualified - so please make sure you're linking to your actual post. It must be linked by midnight Pacific Time on the scheduled end date, which will be three days before the end of the month. You must use a new project; back-linking is NOT allowed.

*Your project can be anything (card, scrapbook page, mixed media, altered or 3-D item, etc) as long as it is handmade and stamped somewhere with at least 1 rubber or digital stamp....from SMEARED INK . We have taken into consideration our digital artist fans and will be allowing all-digi projects. Please note that while collage sheet images can be used in your project, the collage image does NOT count as a stamped image. You still need to use a rubber or digital stamp somewhere on your project. Feel free to think outside the box and have fun with your project! We are all about looking at things differently and look forward to the variety of projects and mediums we are sure to see.

*You can only enter the challenge and qualify for a prize if you are, or become, a follower of the Smudgy Antics blog. Also, you must mention Smudgy Antics in your blog post and provide a link to our blog. This helps others to find us so they may play along as well.

*The winner will be chosen by RANDOM DRAW and will be revealed on the last day of the month. The winner will get BOTH the prize and a winner's blog button to display on their blog. A TOP 3 will be voted for by the DT and shall get a WINNERS BLOG BUTTON... Only the best projects will win TOP 3 so bring your A-game!

Check out our Smeared and Smudged Blog, where we host all of our annual events and keep you up to date on everything Smeared Ink!

Join other wicked awesome stampers on our Smeared and Smudged Facebook Group! Share your art, chat, and join others who love alternative, vintage, and gothic art rubber stamping! Stamps from all companies welcome.